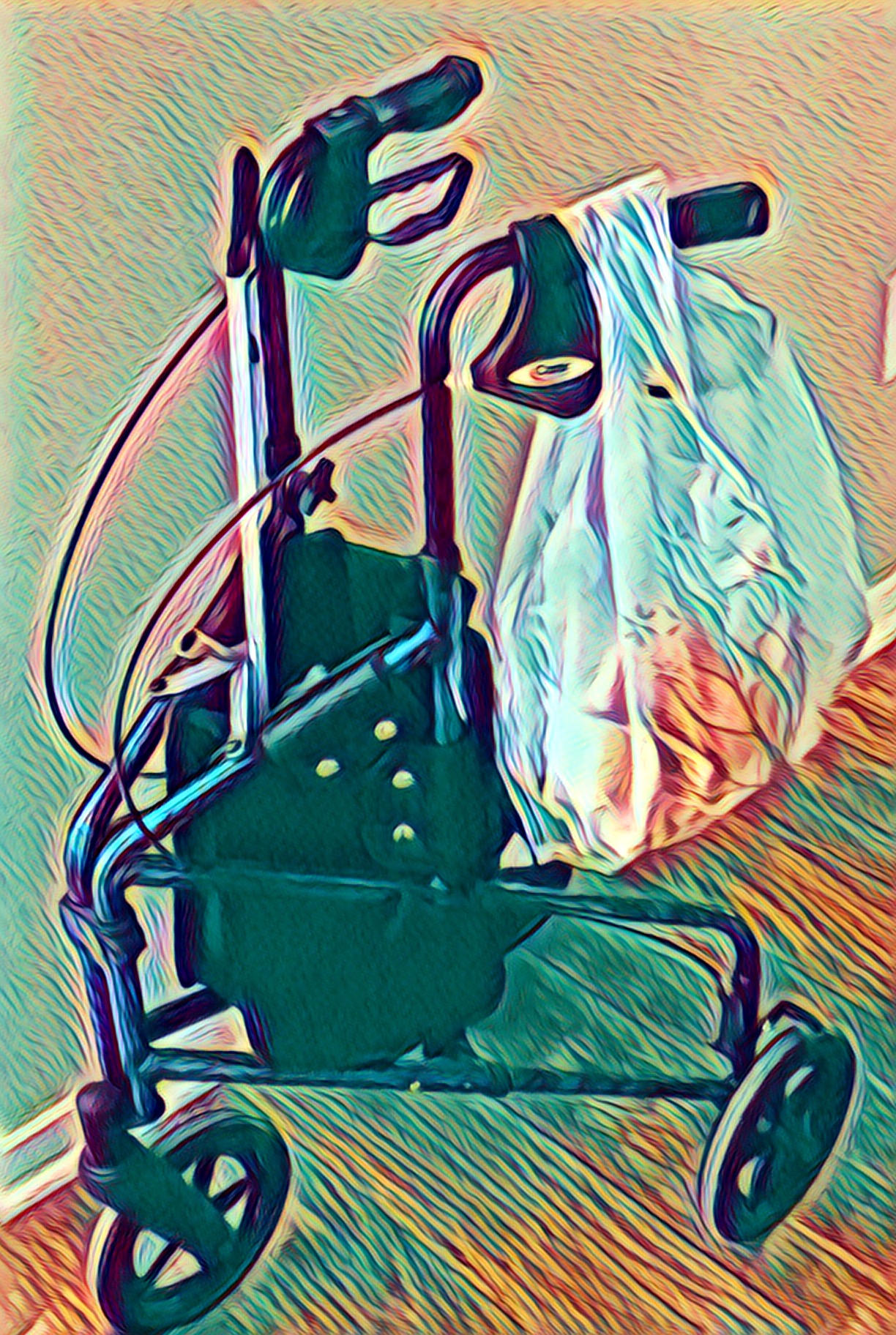 God bless William, Elmer, and Alfred—inventors of the *walker for mobility.

I’m thankful for the one I used for about six months, and for my eighty-eight-year old mom having freedom with hers. I think…

Mom literally walked her first walker’s wheels into shreds, down to the metal. I wished I’d taken a photo. It lasted for over two years.

Evidence-This photo was taken by my husband, who was on Mom watch, when I was at my writing day with friends. It is the new and improved model, designed lighter, easier to maneuver, plus larger and with more substantial wheels for outdoor-walker-hikers. Notice the metal pole standing up out of her basket? Uh huh. Mom discovered where I hid the reacher and sneaks it outside. Sigh. I’ve posted how she was our neighborhood’s self-appointed trash lady for a few years, until she fell. She’s also taken to stashing the trash bags in her room again for trash collection. Notice that this bag is full? I reminded her of her Physician’s Assistant’s orders to NOT pick up the trash. She argued. Heftier sigh.

Mom’s a ten-year old again. She sneaks. She argues. She’s supposed to walk twenty minutes at a time. I’ve caught her out for an hour. When we purchased her new walker, little did I know the future boundary battle we’d be in over her stroll times and trash collection behavior with her reacher. Let me say this, I do understand her need for exercise and not sitting all day. She says she needs a purpose, too. Yes.

I am also happy to give Mom kudos for now sticking to ONLY walking in our apartment complex. Everyone knows her, she’s nearby, and she’s armed with her Bay Alarm pendant around her neck.

Urgent question—Anyone know how to successfully be the boss of your mom?

*A walker or walking frame is a tool for disabled or elderly people who need additional support to maintain balance or stability while walking. In the United Kingdom, a common equivalent term for a walker is Zimmer frame, a genericised trademark from Zimmer Holdings, a major manufacturer of such devices and joint replacement parts.

Walkers started appearing in the early 1950s. The first US patent was awarded in 1953 to William Cribbes Robb, of Stretford, UK, for a device called “walking aid”, which had been filed with the British patent office in August 1949.[1] Two variants with wheels were both awarded US patents in May 1957,[2][3] and the first non-wheeled design that was called a “walker” was patented in 1965 by Elmer F. Ries of Cincinnati, Ohio.[4] The first walker to resemble modern walkers was patented in 1970 by Alfred A. Smith of Van Nuys, California.[5]  (Wikipedia)

Start a Blog at WordPress.com.